SALVANO - a magician who became a legend in the world of magic on this planet.Many magicians knows his stage-act by heart.
Since 1968 he travels around the world, performing his act on all continents.Main effects in his act: productions of real glasses full of liquid, card manipulations with his famous "back and front" techniques, which are unique in magic with cards. Nevertheless, this is only a short stage-act, in which SALVANO has put all his professional knowledge, skill and experience. Being professional magician since 1948, SALVANO was performing in his native country -Poland- until 1966. He traveled with full-evening shows. In this period of 18 years, he had changed 6 times a two hours show. The last one was his "Theatre of illusions" with two tons of material, and a team of 20 persons.
In this show (about 2 and 1/2 hours), he performed 14 big illusions. In 1966, he has received a contract for Yugoslavia. He stayed there 4 years. He had use that time to build his glass act. SALVANO was an all-round magician who performed in his life almost every kind of magic: from micro magic through close-up magic, salon magic to big illusions. He had a large professional knowledge and over 55 years of stage experience. His very personal, very different approach to magic makes him what he was - a master in his profession. 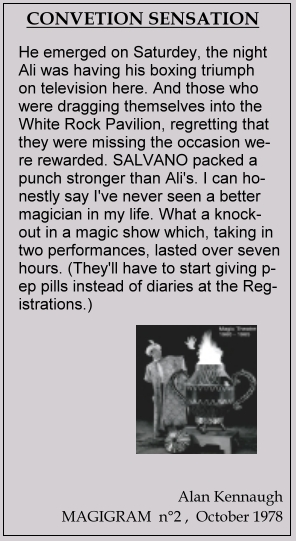